As a kid, I was a below-average speller. Like, below, below. A teacher once told me, you’ll never be an editor. Turns out teachers don’t know everything, because I’ve been an editor and it worked out just fine.

Like so many others who have a deficiency, I quickly realized that I also had an area of unusual talent: Anything you tell me I will remember for years—often verbatim. Friends are taken aback when I say, “oh, it’s like that old boyfriend you told me about once who used to do that thing,” a thing that they had previously forgotten all about until that moment.

I love listening. In college, I thought I would become a concert violinist. Play me a melody, and I can play it right back. But as much as I loved music, immersing myself in people’s stories thrilled me even more. The only job I could find that required sitting and listening and reveling stories
was journalism. So here I am.

I’ve spent the last decade working in journalism including editing a fashion magazine, a fitness magazine and a local newspaper that had a column written in the voice of a gopher tortoise. I’m married to a park ranger, and we bounce between national parks. Eight years ago, in hopes of forming a career that could move with me, I decided to go freelance.

Along the way, I’ve gotten to write a range of stories. I’ve held the hands of people who are dying as they told me about their lives. I’ve ridden a mountain bike on a Swiss alp. I’ve very narrowly avoided stepping on a cottonmouth while knee-deep in the Big Cypress Swamp. My most recent adventure was working on The Innocent Man, a Netflix true crime docuseries.

Between deadlines, I’ve slipped outside to ride my bike, run a few marathons, race a couple Ironmen, and climb a few mountains.

And the spelling? I get by just fine. 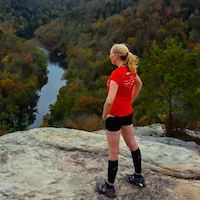